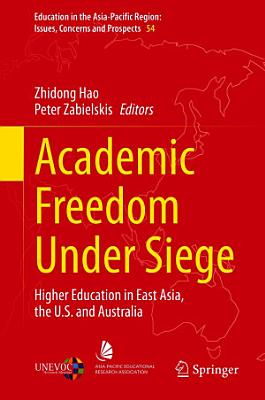 This book argues that academic freedom in higher education in East Asia, the U.S. and Australia is under stress. Academic freedom means freedom to teach, research, and serve in multiple political and social roles based on professional principles. It is closely linked to shared governance, in which academics participate in and influence decision making in core academic concerns such as choosing new faculty, faculty promotion, tenure decisions and the approval of new academic programs. In different countries and regions, the duress confronting academic freedom may come from different directions, and the ability of faculty to share power can vary greatly. In authoritarian mainland China, it is mostly political and ideological controls that greatly affect academic freedom, and shared governance is very much limited. In semi-democracies like Hong Kong and Macau and democracies like Taiwan, Japan, South Korea, the U.S. and Australia, corporatization and commercialization have had great impact on both academic freedom and shared governance. The result is that the roles professors play within academia are continually being diminished and the academic profession is struggling to maintain its ground. Similar developments are also occurring in Europe. These developments should cause great concern to educators, researchers and policymakers everywhere. The authors collected here present attempts to learn from current practice in order to move policy into directions that will help protect higher education as a common good. This book highlights the importance of academic freedom and provides insights into the ways it is being infringed both by commercialization and corporatization on the one hand and political repression on the other. It vividly illustrates detailed case studies and empirical data that make it a compelling read.- Professor Ruth Hayhoe, University of Toronto, Canada Academic freedom is as important today as at any time in the last century. The authors point out the challenges that academic freedom faces on a global scale. The import of the book is in its comparative perspective steeped in data and analysis. Thoughtful. Cogent. Compelling. - Professor William G. Tierney and Professor Wilbur-Kieffer, University of Southern California, United States

This book argues that academic freedom in higher education in East Asia, the U.S. and Australia is under stress. Academic freedom means freedom to teach, resear

The ideal of academic freedom is the cornerstone of higher education. Increasingly however, state control has encroached upon the universities' traditional free

What needs to be done to strengthen U.S. democracy, to make it work the way it should? Each generation of Americans asks some version of this question, but this

In a Washington, D.C., under siege by drug lords, Jake Grafton is assigned to hunt down an assassin bent on eliminating the President and his entire cabinet

Academic freedom has been a principle that undergirds the university since 1915. Beyond this, it also protects a spirit of free inquiry essential to a democrati

The Future of Academic Freedom

This book argues that academic freedom in higher education in East Asia, the U.S. and Australia is under stress. Academic freedom means freedom to teach, resear

Cultural differences are not asserted through the specificity of dominant notions of race, gender, and class, but through a commitment to expanding dialogue and

Through conversations in honor of Dale D. Johnson, this book takes a critical view of the monoculture in curriculum and policy that has developed in education w

Engages with the life and work of Larry Alexander to explore puzzles and paradoxes in legal and moral theory.