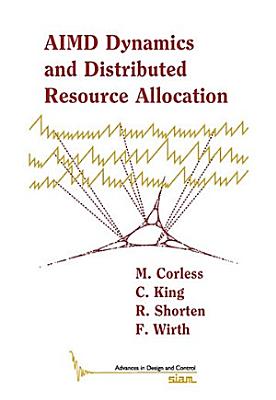 This is the first comprehensive book on the AIMD algorithm, the most widely used method for allocating a limited resource among competing agents without centralized control. The authors offer a new approach that is based on positive switched linear systems. It is used to develop most of the main results found in the book, and fundamental results on stochastic switched nonnegative and consensus systems are derived to obtain these results. The original and best known application of the algorithm is in the context of congestion control and resource allocation on the Internet, and readers will find details of several variants of the algorithm in order of increasing complexity, including deterministic, random, linear, and nonlinear versions. In each case, stability and convergence results are derived based on unifying principles. Basic and fundamental properties of the algorithm are described, examples are used to illustrate the richness of the resulting dynamical systems, and applications are provided to show how the algorithm can be used in the context of smart cities, intelligent transportation systems, and the smart grid.

This is the first comprehensive book on the AIMD algorithm, the most widely used method for allocating a limited resource among competing agents without central

This is the first comprehensive book on the AIMD algorithm, the most widely used method for allocating a limited resource among competing agents without central

This book presents new computational tools for the H? control of distributed parameter systems in which transfer functions are considered as input-output descri

Extremum Seeking Through Delays and PDEs

Extremum Seeking through Delays and PDEs, the first book on the topic, expands the scope of applicability of the extremum seeking method, from static and finite

A Variational Approach to Optimal Control of ODEs

This self-contained book presents in a unified, systematic way the basic principles of optimal control governed by ODEs. Using a variational perspective, the au

A resurgence of interest in network synthesis in the last decade, motivated in part by the introduction of the inerter, has led to the need for a better underst

How do you fly an airplane from one point to another as fast as possible? What is the best way to administer a vaccine to ﬁght the harmful eﬀects of disease

This book is about nonlinear observability. It provides a modern theory of observability based on a new paradigm borrowed from theoretical physics and the mathe