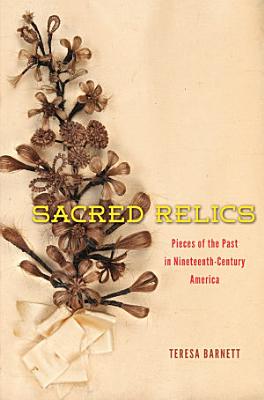 A piece of Plymouth Rock. A lock of George Washington’s hair. Wood from the cabin where Abraham Lincoln was born. Various bits and pieces of the past—often called “association items”—may appear to be eccentric odds and ends, but they are valued because of their connections to prominent people and events in American history. Kept in museum collections large and small across the United States, such objects are the touchstones of our popular engagement with history. In Sacred Relics, Teresa Barnett explores the history of private collections of items like these, illuminating how Americans view the past. She traces the relic-collecting tradition back to eighteenth-century England, then on to articles belonging to the founding fathers and through the mass collecting of artifacts that followed the Civil War. Ultimately, Barnett shows how we can trace our own historical collecting from the nineteenth century’s assemblages of the material possessions of great men and women.

A piece of Plymouth Rock. A lock of George Washington’s hair. Wood from the cabin where Abraham Lincoln was born. Various bits and pieces of the past—often

Many books have been published on the Battle of Gettysburg, but this is the first one devoted entirely to the battlefield recovered relics, as well as the Getty

Battlefield Events: Landscape, Commemoration and Heritage is an investigative and analytical study into the way in which significant landscapes of war have been

Much of the material available to readers in the English language interested in the exploits of the troops of Hanover, Brunswick and Nassau is in the form of dr

The Battle of Resaca

The battle of Resaca, Georgia, in May 1864, represents a series of firsts: the first major battle of the Atlanta Campaign, the first occasion in Georgia in 1864

Journal of the Civil War Era

A Strange and Blighted Land

“An exhaustive compilation of first-hand accounts of the Gettysburg battlefield in the days, weeks, and months following the fight . . . heartbreaking.” —

This book examines Canada's collective memory of the First World War through the 1920s and 1930s. It is a cultural history, considering art, music, and literatu

Through their photographic representation, the stories they tell and their actual historical significance, the battlefield relics shown here cast a different li