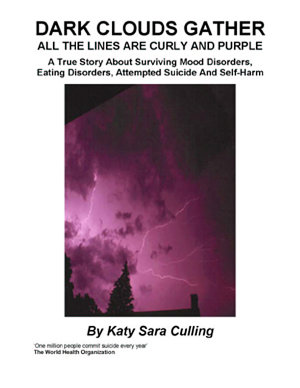 Description This book includes a true story about reaching the very edge, the very depths and heights of bipolar illness, but almost always with a sense of humour. Much like a car crash, people cannot help but look when they spy on these sort of black events. It is a new perspective on manic depression as in Prof K.R. Jamison's autobiography about her illness in An Unquiet Mind, but mixed explosively with S. Kaysen's immersion into madness in Girl, Interrupted; except this book feels like it's been written whilst on crack-cocaine and directed by Quentin Tarantino on a blood-thirsty day. This book may be dark but its underlying message is one of hope. Sometimes you have to see the depths of Hades before you can really appreciate life and health. Being a manic depressive from just 5, then adding in anorexia, bulimia, self-harm and hundreds of suicide attempts, "typical" student substance misuse on the heavy end of "normal," culminating in a long hospitalisation when I was an Oxford doctoral student in clinical medicine. I ended up totally "mad," in a long-term psychotic mixed episode (being both manic and depressed concurrently, and suffering from delusions and hallucinations) and several actual deaths that I was revived from. This had a massive impact on the lives of my friends and family who have been dragged through 25 years of serious illness whilst feeling helpless and scared. I also experienced a lot of unhelpful medical treatment and misdiagnoses - all detailed here, which should teach those in the profession what not to do. This book will also answer the questions of friends and family, and give some pointers of ways to help and not help. I lost many friends as I withdrew into my illness, but I made many friends with people similarly ill. Some have died, some have recovered, and some remain ill. All agree that such a complete and honest book like mine is needed. This is my autobiographical tale, a girl who came from nowhere "up North" to study medicine at Oxford University and spent the majority of her life quite literally mad, but never stopped laughing about it. This suits a wide audience for personal and professional reasons. I want to reach sufferers, carers, and professionals. I am proof that anything can be overcome, what should not be survived can be, and that nothing is more important in these diseases than hope. About the AuthorKaty Sara Culling was born in Liverpool, North England, in 1975. Daughter of Sue and Paul Culling, her family moved back to its roots in Derbyshire, where she grew up along with her younger sister Beth, in the village of Castle Donington, on the Derbyshire-Leicestershire border. However, even as young as 5 she exhibited symptoms of bipolar disorder. She attended a private school for girls, Loughborough High School, where she was a high achieving student. Unfortunately, due to bullying and also to numb her mania and depression, she developed anorexia nervosa and began to self-harm. Katy Sara then went to The University of Nottingham, where she studied Biochemistry and Nutrition. She did her (1st class) thesis on alcohol and metabolism, interested in the psychology of Alcoholism. All this was done despite considerable illness including over 60 suicide attempts and purging-type anorexia - and yet more bullying. Her good work at Nottingham lead to an offer of a place at The University of Oxford, where she studied for a PhD (DPhil) in Clinical Medicine. In her final year she became so ill with bipolar disorder that she was in hospital (first as a day patient, then an inpatient, and eventually a sectioned inpatient). During that year and a half she attempted suicide over 300 times, dying twice, only to be revived. She finally, at the age of 28 got a diagnosis of bipolar disorder and the correct medication, and has been mostly fine ever since. She later wrote up her PhD thesis and published her results. Now Katy Sara is mostly well and has become a writer, wanting to prevent othe

Description This book includes a true story about reaching the very edge, the very depths and heights of bipolar illness, but almost always with a sense of humo

People do things for reasons, but what are reasons and how are they related to the resulting actions? Bittner explores this question and proposes an answer: a r

After the return of the transcender, all sorts of otherworldly elders would collide within the shop. The person who destroyed a planet with a single punch could

The 'enchanted wheat', a tale, by M.B. Bickerstaffe and S.B.P.

Everyone disagrees on some things; this is inevitable. The question is, how can we disagree with those we love but increase the odds that we will live and love

n addition to the five superpowers, there are many second-class forces and independent strongmen, including peace loving elves and a small number of dragons! Th

Culture of the Sepulchre