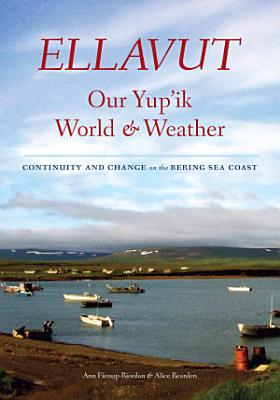 Ellavut / Our Yup'ik World and Weather is a result of nearly ten years of gatherings among Yup'ik elders to document the qanruyutet (words of wisdom) that guide their interactions with the environment. In an effort to educate their own young people as well as people outside the community, the elders discussed the practical skills necessary to live in a harsh environment, stressing the ethical and philosophical aspects of the Yup'ik relationship with the land, ocean, snow, weather, and environmental change, among many other elements of the natural world. At every gathering, at least one elder repeated the Yup'ik adage, "The world is changing following its people." The Yup'ik see environmental change as directly related not just to human actions, such as overfishing or burning fossil fuels, but also to human interactions. The elders encourage young people to learn traditional rules and proper behavior--to act with compassion and restraint--in order to reverse negative impacts on their world. They speak not only to educate young people on the practical skills they need to survive but also on the knowing and responsive nature of the world in which they live.

Ellavut / Our Yup'ik World and Weather

Explores the unprecedented and rapid climate changes occurring in the Arctic environment. Climate change, one of the drivers of global change, is controversial

In this volume Nelson Island elders describe hundreds of traditionally important places in the landscape, from camp and village sites to tiny sloughs and deep o

The Language of Hunter-Gatherers

Offers a linguistic window into contemporary hunter-gatherer societies, looking at how they survive and interface with agricultural and industrial societies.

Relational Engagements of the Indigenous Americas

Collaborative exploration of global environmental crises focusing on the co-production of knowledge from scientific, indigenous sources.