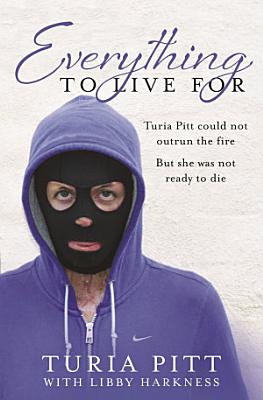 Everything to Live For is the story of one young woman’s survival against extraordinary odds, a testament to the human spirit. In September 2011, Turia Pitt, a beautiful 25-year-old mining engineer working her dream job in the far north of Western Australia, entered an ultra-marathon race that would change her life forever. Trapped by a fire in a gorge in the remote Kimberly region, Turia and five other competitors had nowhere to run. Turia escaped with catastrophic burns to 65 per cent of her body. With too little unburned skin left for skin grafts, Turia was put in an induced coma in the Burns Unit at Sydney’s Concord Hospital while her body fought life-threatening infections and her surgeons imported skin from California. She lost the fingers on her right hand and her fingers on her left are partially fused together. She needed a new nose. There have been numerous operation, yet there are many more to come. While the story of Turia’s survival involves many people - other race competitors, her rescuers, medical professionals - at its core is the strong will of Turia herself as she continues the long rehabilitation process with the loving support of her partner, Michael Hoskin, and that of their families in their New South Wales south coast hometown of Ulladulla, where the local community has rallied, raising funds to help with huge medical bills. Everything to Live For is also a love story. Michael, Turia’s handsome teenage crush who became the love of her life, now cares for her as they plan a new life together; he is there to encourage Turia in her determination to move forward in an outwardly different body. The real tragedy of this story is that it should never have happened - because the race should never have happened. Despite facing a future with multiple challenges, Turia is optimistic. She is driving again and studying for her Master’s degree. She is walking in marathons and would one day like to run again. Above all, she wants her story to make a difference: her mission is to make skin a more prominent organ in the repertoire of donated organs. It is a miracle Turia lived when she was expected to die. But Turia was not ready to die - she had too much to live for.

Everything to Live For

Everything to Live For is the story of one young woman’s survival against extraordinary odds, a testament to the human spirit. In September 2011, Turia Pitt,

Everything We Need for Life and Godliness

Why do we read the Psalms? We read them because we find comfort in them. We identify ourselves with the ups and downs of the writer, his feelings and emotions.

EVERYTHING IN LIFE REVOLVES AROUND LOVE

This book is a call to accept rational thought as a way of loving God and humanity. It appeals to resist any more reasoning about mind and heart, feeling at the

Everything She Ever Wanted

The story of a southern belle gone wrong presents the shocking tale of Patricia Vann Radcliffe Taylor Allanson, who tried to murder members of her own family to

Yes To Life In Spite of Everything

'Viktor Frankl gives us the gift of looking at everything in life as an opportunity' Edith Eger, bestselling author of The Choice 'Offers a path to finding hope

Life and Everything in Between

I don’t know what to say, I just can’t believe my life went this way. Things fell apart at all corners and I stood directly in the middle of it all. I cried

Hello Baby! Everything new mums need to know about life with baby

Does Dream Change Everything?

Here is one of the finest fictional stories collection, that you must read it. When I was reading the bio of this book I felt like those incidents and views are

The Everything Guide To Writing A Novel

This step-by-step guide teaches you the tricks of the trade, with advice on all you need to know to compete in the world of fiction. Whether you are seeking to