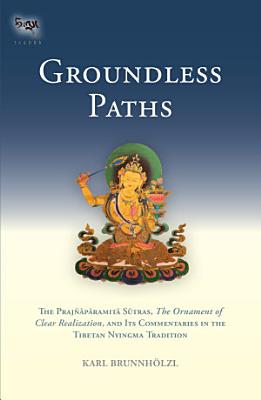 The Abhisamayalamkara summarizes all the topics in the vast body of the prajñaparamita sutras. Resembling a zip-file, it comes to life only through its Indian and Tibetan commentaries. Together, these texts not only discuss the "hidden meaning" of the prajñaparamita sutras—the paths and bhumis of sravakas, pratyekabuddhas, and bodhisattvas—but also serve as contemplative manuals for the explicit topic of these sutras—emptiness—and how it is to be understood on the progressive levels of realization of bodhisattvas. Thus these texts describe what happens in the mind of a bodhisattva who meditates on emptiness, making it a living experience from the beginner's stage up through buddhahood. Groundless Paths contains the first in-depth study of the Abhisamayalamkara (the text studied most extensively in higher Tibetan Buddhist education) and its commentaries from the perspective of the Nyingma School of Tibetan Buddhism. This study consists mainly of translations of Maitreya's famous text and two commentaries on it by Patrul Rinpoche. These are supplemented by three short texts on the paths and bhumis by the same author, as well as extensive excerpts from commentaries by six other Nyingma masters, including Mipham Rinpoche. Thus this book helps close a long-standing gap in the modern scholarship on the prajñaparamita sutras and the literature on paths and bhumis in mahayana Buddhism. Arya Maitreya's Ornament of Clear Realization, with its Indian and Tibetan commentaries, presents the complex dynamics of the path to liberation as a succession of realizations of the empty nature of all phenomena. This presentation is a powerful antidote to whatever two-dimensional views we might hold about spiritual experience and the journey to enlightenment.

The Abhisamayalamkara summarizes all the topics in the vast body of the prajñaparamita sutras. Resembling a zip-file, it comes to life only through its Indian

"Courageous Compassion, the sixth volume of the Library of Wisdom and Compassion, continues the Dalai Lama's teachings on the path to awakening. While volume 5,

The Abhisamayalamkara summarizes all the topics in the vast body of the Prajnaparamita Sutras. Resembling a zip-file, it comes to life only through its Indian a

The Gathering of Vidyadharas

One of the most important sadhana cycles in the Nyingma school of Tibetan Buddhism, the Rigdzin Düpa, or Gathering of the Vidyadharas, is practiced by tens of

The primary goal of Nitartha Institute is to provide students with a systematic foundation in the central teachings of the Buddhist tradition. The Institute uph

A modern and accessible reader of Classical Tibetan Buddhist texts based on the traditional monastic educational system, designed for both classroom use and ind

Concentrating on the eighteenth and nineteenth centuries, he traces its development up to 1878 and one of its earliest conscious articulations, Thomas Hardy's d

The Tantric Path of Indestructible Wakefulness