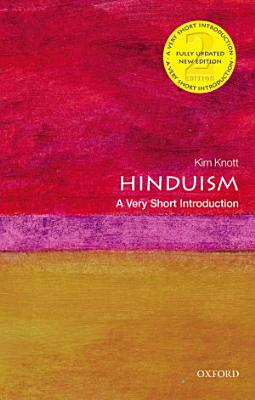 Hinduism is practised by nearly eighty per cent of India's population, and by some seventy million people outside India. In this Very Short Introduction, Kim Knott offers a succinct and authoritative overview of this major religion, and analyses the challenges facing it in the twenty-first century. She discusses key preoccupations of Hinduism such as the centrality of the Veda as religious texts, the role of Brahmins, gurus, and storytellers in the transmission of divine truths, and the cultural and moral importance of epics such as the Ramayana. In this second edition Knott considers the impact of changes in technology and the flourishing of social media on Hinduism, and looks at the presence of Hinduism in popular culture, considering pieces such as Sita Sings the Blues. She also analyses recent developments in India, and the impact issues such as Hindu nationalism and the politicization of Hinduism have on Hindus worldwide. ABOUT THE SERIES: The Very Short Introductions series from Oxford University Press contains hundreds of titles in almost every subject area. These pocket-sized books are the perfect way to get ahead in a new subject quickly. Our expert authors combine facts, analysis, perspective, new ideas, and enthusiasm to make interesting and challenging topics highly readable.

Hinduism is practised by nearly eighty per cent of India's population, and by some seventy million people outside India. In this Very Short Introduction, Kim Kn

On the schools of Indian philosophy

The Sikh religion has a following of over 20 million people worldwide, and is ranked as the world's fifth largest religion. However, events such as the verbal a

Fundamentalism is seen as the major threat to world peace, a conclusion impossible to ignore since the events in New York on September 11 2001. This book invest

Hinduism is practised by nearly eighty per cent of India's population, and by some seventy million people outside India. In this Very Short Introduction, Kim Kn

India has become one of the world's emerging powers, rivaling China in terms of global influence. Yet many people know relatively little about the economic, soc

With a decline in traditional religious belief, interest in spirituality has grown in Western cultures. The notion of spirituality expresses the fact that peopl

Traces the history of Hinduism from its beginning, describing a history of the different branches of the religion including Vaisnavism, Saivism, and Saktism, an

The Buddha: A Very Short Introduction

Michael Carrithers guides us through the complex and sometimes conflicting information that Buddhist texts give about the life and teaching of the Buddha. He di

Introduces Buddhism, looking at how the tradition began and how it evolved and explaining its central teachings and practices.