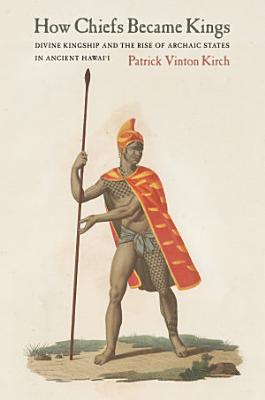 In How Chiefs Became Kings, Patrick Vinton Kirch addresses a central problem in anthropological archaeology: the emergence of “archaic states” whose distinctive feature was divine kingship. Kirch takes as his focus the Hawaiian archipelago, commonly regarded as the archetype of a complex chiefdom. Integrating anthropology, linguistics, archaeology, traditional history, and theory, and drawing on significant contributions from his own four decades of research, Kirch argues that Hawaiian polities had become states before the time of Captain Cook’s voyage (1778-1779). The status of most archaic states is inferred from the archaeological record. But Kirch shows that because Hawai‘i’s kingdoms were established relatively recently, they could be observed and recorded by Cook and other European voyagers. Substantive and provocative, this book makes a major contribution to the literature of precontact Hawai‘i and illuminates Hawai‘i’s importance in the global theory and literature about divine kingship, archaic states, and sociopolitical evolution.

In How Chiefs Became Kings, Patrick Vinton Kirch addresses a central problem in anthropological archaeology: the emergence of “archaic states” whose distinc

"Guitars inspire cult-like devotion: an afficionado can tell you precisely when and where their favorite instruments were made. And she will likely also tell yo

Sharks upon the Land

A study of colonialism and indigenous health in Hawaiʻi, highlighting cultural change over time.

A Shark Going Inland Is My Chief

Tracing the origins of the Hawaiians and other Polynesians back to the shores of the South China Sea, archaeologist Patrick Vinton Kirch follows their voyages o

The Journal of the Switchmen's Union of North America

In early Hawai‘i, kua‘āina were the hinterlands inhabited by nā kua‘āina, or country folk. Often these were dry, less desirable areas where much skill

Around the World with a King

Archaeological Theory in a Nutshell