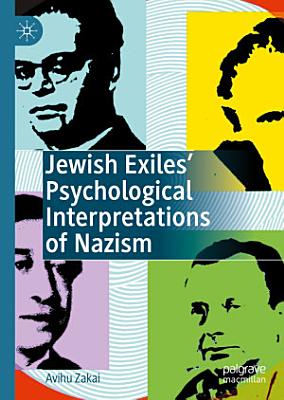 This book examines works of four German-Jewish scholars who, in their places of exile, sought to probe the pathology of the Nazi mind: Wilhelm Reich’s The Mass Psychology of Fascism (1933), Erich Fromm’s Escape from Freedom (1941), Siegfried Kracauer’s From Caligari to Hitler: A Psychological History of the German Film (1947), and Erich Neumann’s Depth Psychology and a New Ethic (1949). While scholars have examined these authors’ individual legacies, no comparative analysis of their shared concerns has yet been undertaken, nor have the content and form of their psychological inquiries into Nazism been seriously and systematically analyzed. Yet, the sense of urgency in their works calls for attention. They all took up their pens to counter Nazi barbarism, believing, like the English jurist and judge Sir William Blackstone, who wrote in 1753 - scribere est agere ("to write is to act").

This book examines works of four German-Jewish scholars who, in their places of exile, sought to probe the pathology of the Nazi mind: Wilhelm Reich’s The Mas

In This Hour: Heschel's Writings in Nazi Germany and London Exile

Oxford AQA History: A Level and AS: Democracy and Nazism: Germany 1918-1945 Revision Guide

This Democracy and Nazism: Germany 1918-1945 Revision Guide is part of the bestselling Oxford AQA History for A Level series. Written to match the new AQA speci

C. G. Jung and Erich Neumann first met in 1933, at a seminar Jung was conducting in Berlin. Jung was fifty-seven years old and internationally acclaimed for his

The Exile of George Grosz

Germany: Jekyll and Hyde — An Eyewitness Analysis of Nazi Germany

In this book written in early 1940 in England, Sebastian Haffner, a recent refugee from Nazi Germany, analyzed Hitler, the Nazis, the German population, and Ger

Act and Idea in the Nazi Genocide

This work is an analysis of the ideology, causal patterns, and means employed in the Nazi genocide against the Jews. It argues that the events of the genocide c

Pictorial Narrative in the Nazi Period

This book investigates creative responses to the Nazi period in the work of three artists, Felix Nussbaum, Charlotte Salomon and Arnold Daghani, focusing on the

Exile and Gender I

Exile and Gender I: Literature and the Press focuses on the work of exiled women writers and journalists and on gendered representations in the writing of both

German-Jewish Literature in the Wake of the Holocaust

Combining cultural history and literary analysis, this study proposes a new and thought-provoking reading of the changing relationship between Germans and Jews