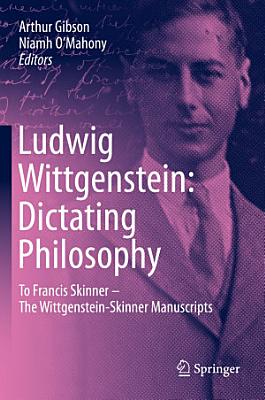 In this volume we witness Wittgenstein in the act of composing and experimenting with his new visions in philosophy. The book includes key explanations of the origin and background of these previously unknown manuscripts. It investigates how Wittgenstein’s philosophical thought-processes are revealed in his dictation to, as well as his editing and revision with Francis Skinner, in the latter’s role of amanuensis. The book displays a considerable wealth and variety of Wittgenstein’s fundamental experiments in philosophy across a wide array of subjects that include the mind, pure and applied mathematics, metaphysics, the identities of ordinary and creative language, as well as intractable problems in logic and life. He also periodically engages with the work of Newton, Fermat, Russell and others. The book shows Wittgenstein strongly battling against the limits of understanding and the bewitchment of institutional and linguistic customs. The reader is drawn in by Wittgenstein as he urges us to join him in his struggles to equip us with skills, so that we can embark on devising new pathways beyond confusion. This collection of manuscripts was posted off by Wittgenstein to be considered for publication during World War 2, in October 1941. None of it was published and it remained hidden for over two generations. Upon its rediscovery, Professor Gibson was invited to research, prepare and edit the Archive to appear as this book, encouraged by Trinity College Cambridge and The Mathematical Association. Niamh O’Mahony joined him in co-editing and bringing this book to publication.

In this volume we witness Wittgenstein in the act of composing and experimenting with his new visions in philosophy. The book includes key explanations of the o

In this volume we witness Wittgenstein in the act of composing and experimenting with his new visions in philosophy. The book includes key explanations of the o

The Aesthetic Commonplace is a study of the everyday as a region of overlooked value in the work of William Wordsworth, George Eliot, and Ludwig Wittgenstein. T

How Wittgenstein sought a more effective way of reaching his audience by a poetic style of doing philosophy. Ludwig Wittgenstein once said, "Really one should w

Ludwig Wittgenstein’s brief Tractatus Logico-Philosophicus (1922) is one of the most important philosophical works of the twentieth century, yet it offers lit

The Life and Philosophy of Elizabeth Anscombe

This volume in the St Andrews series contains a collection of essays from leading authors regarding the work of Elizabeth Anscombe, in particular issues in mind

The Radial Method of the Middle Wittgenstein

Spanning the period between Wittgenstein's return to Cambridge in 1929 and the first version of Philosophical Investigations in 1936, Piotr Dehnel explores the

The essays in this volume investigate the question of where, and in what sense, the bounds of intelligible thought, knowledge, and speech are to be drawn. Is th

Wittgenstein on Forms of Life

The question of what Wittgenstein meant by 'forms of life' has attracted a great deal of attention in the literature, yet it is an expression that Wittgenstein

The aim of this volume is to investigate three fundamental issues of the new millennium: language, truth and democracy. The authors approach the themes from dif