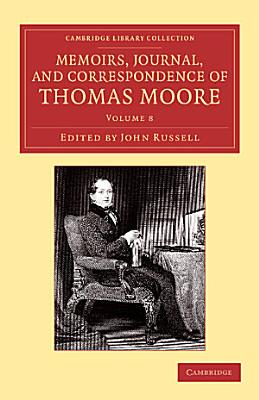 Throughout his professional life, the poet Thomas Moore (1779-1852) was variously celebrated and vilified for both his verse and his politics. Born in Dublin, he remained an ardent Irish patriot until his death. This eight-volume collection of Moore's memoirs, diaries and letters, edited by his friend Lord John Russell (1792-1878) and first published between 1853 and 1856, provides rare insights into a man whose genius was applauded by the Morning Chronicle as 'embracing almost all sides of imaginative literature, of criticism and philosophy'. Volume 8 opens with a portrait of Moore in later life and a view of the valley where he died. This final volume contains Moore's diary for the period 1845-7, prior to his descent into dementia. A selection of correspondence from 1799 to 1847, Russell's postscript and an index to the eight volumes complete the work.