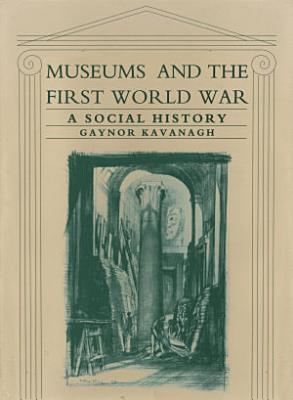 The book is concerned with how, during four demanding, dislocating and world-changing years, that most Victorian of institutions, the museum, was forced or prompted to meet the extraordinary test of war on the home front. Museums were no more immune from the pressures of war than any other institution and the changes in museums during this period, some long term, others transitory, do much to explain the nature and character of museums in Britain today. Their history reveals and reflects the broader history of the home front, and the willing, stumbling, confused efforts to do the right thing at the right time. They were far away from the fighting, the despair and degradation of the battlefields. But they were in some measure not only close to, but part of, a society carrying both its fears and expectations for those operating in a war which disassembled all their lives. The discussion covers the progress of museums from just before the advent of war in August 1914 to the immediate post-war period, 1920, although this is set in the context of museum developments before and after this span of time. Museums are considered in relation to the tensions and prevalent conditions of this period. Further, the nature and effect of the experience of them and the public services they provide, in both the long and short term, are examined.

Museums and the First World War

The book is concerned with how, during four demanding, dislocating and world-changing years, that most Victorian of institutions, the museum, was forced or prom

Belgian Museums of the Great War

Belgian Museums of the Great War: Politics, Memory, and Commerce examines the handling of the centennial of World War I by several museums along the Western Fro

Curating the Great War explores the inception and subsequent development of museums of the Great War and the animating spirit which lay behind them. The book ap

Museums in the Second World War

Peacetime: return to traditional collections concerns -- The past is intrinsic to museums -- The complexities of peacetime -- Appendix: primary sources -- Refer

World War I and American Art

-World War I and American Art provides an unprecedented look at the ways in which American artists reacted to the war. Artists took a leading role in chroniclin

Does War Belong in Museums?

Museums, History and the Intimate Experience of the Great War

The Great War of 1914-1918 was fought on the battlefield, on the sea and in the air, and in the heart. Museums Victoria’s exhibition World War I: Love and Sor

The First World War A-Z is a concise, pocket-size guide, taking readers through the impressive collection of materials related to the Great War in the Imperial