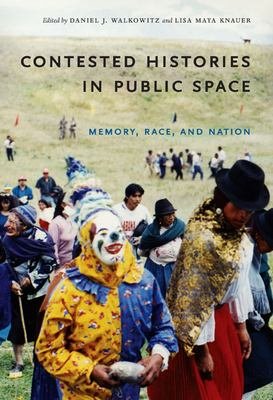 Contested Histories in Public Space brings multiple perspectives to bear on historical narratives presented to the public in museums, monuments, texts, and festivals around the world, from Paris to Kathmandu, from the Mexican state of Oaxaca to the waterfront of Wellington, New Zealand. Paying particular attention to how race and empire are implicated in the creation and display of national narratives, the contributing historians, anthropologists, and other scholars delve into representations of contested histories at such “sites” as a British Library exhibition on the East India Company, a Rio de Janeiro shantytown known as “the cradle of samba,” the Ellis Island immigration museum, and high-school history textbooks in Ecuador. Several contributors examine how the experiences of indigenous groups and the imperial past are incorporated into public histories in British Commonwealth nations: in Te Papa, New Zealand’s national museum; in the First Peoples’ Hall at the Canadian Museum of Civilization; and, more broadly, in late-twentieth-century Australian culture. Still others focus on the role of governments in mediating contested racialized histories: for example, the post-apartheid history of South Africa’s Voortrekker Monument, originally designed as a tribute to the Voortrekkers who colonized the country’s interior. Among several essays describing how national narratives have been challenged are pieces on a dispute over how to represent Nepali history and identity, on representations of Afrocuban religions in contemporary Cuba, and on the installation in the French Pantheon in Paris of a plaque honoring Louis Delgrès, a leader of Guadeloupean resistance to French colonialism. Contributors. Paul Amar, Paul Ashton, O. Hugo Benavides, Laurent Dubois, Richard Flores, Durba Ghosh, Albert Grundlingh, Paula Hamilton, Lisa Maya Knauer, Charlotte Macdonald, Mark Salber Phillips, Ruth B. Phillips, Deborah Poole, Anne M. Rademacher, Daniel J. Walkowitz

Contested Histories in Public Space brings multiple perspectives to bear on historical narratives presented to the public in museums, monuments, texts, and fest

A complete guide to the Mexican city offers thorough coverage of the region, from the Pacific Beaches to the Northern Sierras and the Oaxaca Valley, and Includi

This book relates the longitudinal participant observation and analysis of the behaviour of the Oaxacan art community, focusing on the cultural production, inte

This full-color guide includes vibrant photos and helpful maps. Traveler and author Justin Henderson covers the best of Oaxaca, from bargaining at the Mercado J

The Value of Aesthetics

Unlike many other handicrafts in the Mexican state of Oaxaca, which have long cultural and historical trajectories, Oaxacan woodcarving began in the second half

What do exotic area rugs, handcrafted steel-string guitars, and fiddling have in common today? Many contemporary tradition bearers embrace complexity in form an

With rugged mountain ranges and stunning Pacific coastline, savory mole and smoky mezcal, Oaxaca is more than just a stop along the way: it's an adventure in it

The story behind the international trade in Oaxacan textiles

Since the mid-1980s, whimsical, brightly colored wood carvings from the Mexican state of Oaxaca have found their way into gift shops and private homes across th