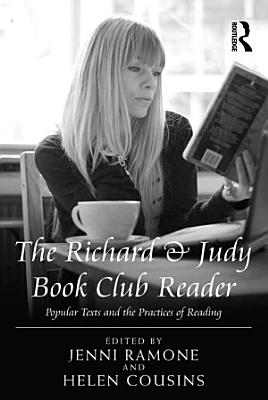 In January 2004, daytime television presenters Richard Madeley and Judy Finnigan launched their book club and sparked debate about the way people in Britain, from the general reader to publishers to the literati, thought about books and reading. The Richard & Judy Book Club Reader brings together historians of the book, literature scholars, and specialists in media and cultural studies to examine the effect of the club on reading practices and the publishing and promotion of books. Beginning with an analysis of the book club's history and its ongoing development in relation to other reading groups worldwide including Oprah's, the editors consider issues of book marketing and genre. Further chapters explore the effects of the mass-broadcast celebrity book club on society, literature and its marketing, and popular culture. Contributors ask how readers discuss books, judge value and make choices. The collection addresses questions of authorship, authority and canon in texts connected by theme or genre including the postcolonial exotic, disability and representations of the body, food books, and domesticity. In addition, book club author Andrew Smith shares his experiences in a fascinating interview.

'A story of life, love and hope - the perfect antidote to today's world. Phenomenal' CLARE MACKINTOSH The incredible, life-affirming new novel by the author of

Reading Beyond the Book

This volume offers the first critical analysis of mass reading events and the contemporary meanings of reading in the UK, USA, and Canada based on original inte

The middlebrow is a dominant cultural force in the twenty-first century. This book defines the new literary middlebrow through eight key features: middle class,

'The most gripping and satisfying thriller I've read in more than a decade' Sophie Hannah 'One of the best legal thrillers ... as elegant and gripping as Scott

The Idea of You

THE SCORCHING HOT RICHARD & JUDY LOVE AFFAIR THAT WILL LEAVE YOU OBSESSED! 'IF YOU ONLY READ ONE BOOK THIS YEAR, MAKE IT THIS' 5***** reader review 'SUMMER'S SA

THE MOST TERRIFYING BOOK YOU'LL READ THIS HALLOWEEN . . . THE RICHARD & JUDY BOOK CLUB PICK 'SOME WRITERS HAVE IT, AND SOME DON'T, C.J. TUDOR HAS IT BIG TIME' L

Now You See Her